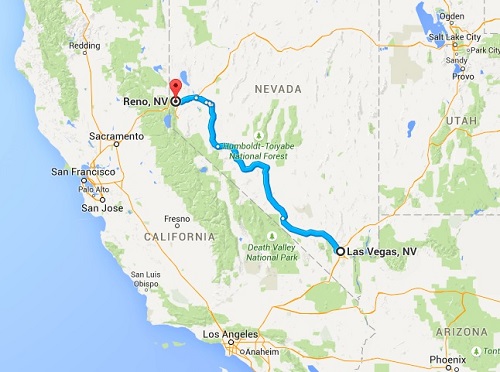 Governor Brian Sandoval, the Office of Energy, and NV Energy Announce the Nevada Electric Highway   http://energy.nv.gov/Programs/Nevada_Electric_Highway/#content . The Nevada Electric Highway is a joint initiative between NV Energy and the State of Nevada and represents the next phase in expanding the state’s EV charging infrastructure to support electric vehicle owners. Once completed, the Nevada Electric Highway will give electric car drivers the freedom to travel the 450 mile Reno to Las Vegas route with charging stops all along the way. Charging stations with the bonus of boosting rural economies by bringing tourists who need to charge their cars to small towns. The state built charging stations are free to use for the first five years they're operational.

To support this effort and promote greater connectivity between neighboring states, Nevada has received acceptance from the U.S. Federal Highway Administration on designation of four strategic corridors within its borders as Alternative Fuel Corridors, including Interstates 80 and 15 and US 95 and 50. Nevada’s efforts are further strengthened by the U.S. Federal Highway Administration’s “Fixing America's Surface Transportation (FAST) Act” designation of I-15, I-80, U.S. 95, and U.S. 50 as EV “Signage-Pending” corridors, a significant step for corridors to meet newly designated federal standards. After infrastructure is completed, the corridors will be re-designated as “Signage Ready”, recognizing Nevada as a key connector for EVs traveling across the West.

Nevada’s Strategic Planning Framework established the goal to complete the “Nevada Electric Highway” system serving the entire state by 2020, building on initial plans to install publicly available EV fast charging infrastructure along U.S. Highway 95 between Reno and Las Vegas (NEH Phase I). The Nevada Electric Highway initiative, led by the Governor’s Office of Energy, aims to achieve this goal through partnership with the Nevada Department of Transportation, Nevada’s electric utilities, and private commercial host sites. Each station incentivized by the Governor’s Office of Energy in Phase I includes two Level 2 charges and one Direct Current (DC) fast charger. Phase II charger requirements are similarly a minimum of two chargers, but with the option to have both Direct Current (DC) fast chargers.

Phase I of the NEH, along U.S. 95, nears completion with three stations operational in Beatty, Fallon, and Hawthorne and two final stations in Tonopah and Indian Springs scheduled to come on-line in 2018. Phase II of the NEH is underway with plans for EV charging infrastructure deployment on the State’s remaining major interstate and highway corridors including I-15, I-80, U.S. 93, and U.S. 50. Phase II development officially began in 2017 with the completion of the EV charging station in Panaca along U.S. Highway 93.

“This collaboration will allow more families, tourists, and travelers the ability to experience the freedom and beauty of the great American West,” said Nevada Governor Brian Sandoval.

The first operational electrical vehicle charging station on the Nevada Electric Highway Phase I is located at Eddie World, 900 E. Highway 95 North in Beatty. The charging station is located near the gas pumps between Eddie World and the Stagecoach Hotel. Some ports recharge a car in four hours, while others charge a car to 80% in 30 minutes.The station opened for public use in February 2016.

The second operational charging stations on the Nevada Electric Highway Phase I is located at Fox Peak Gas Station, 615 E. Williams Avenue on Fallon Paiute-Shoshone tribal land in Fallon. The charging stations are located east of the gas pumps. The station opened for public use in October 2016.

The third operational charging station on the Nevada Electric Highway-Phase I, is located at the Veterans Memorial Park, 400 10th St. in Hawthorne. The Park is a rest area owned and maintained by NDOT. The station opened for public use in March 2018.

The first charging station of the Nevada Electric Highway Phase II is located at McCrosky’s Y Service on U.S. Hwy 93, Jct. 319 in Panaca. The station opened for public use in May 2017. 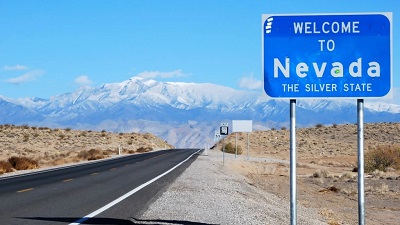 Nevada is Electrifying the Desert!

When complete in 2020, the Nevada Electric Highway will have EV charging stations at each of the following locations: