Ford has released the first image of its upcoming “Mustang inspired” electric SUV. Originally called Mach 1, kick-back from Mustang fans promoted the name change to “Model E”. The new “Model E” is scheduled to debut in 2020 and will have a range of 300 miles per charge.
Ford is currently working from the ground up on its first all electric vehicle. The SUV is being developed by Ford’s new Team Edison division and backed by a $16 billion development investment. Ford shifted one-third of internal combustion engine investments to electric cars.
Ford has said that it was going “All In” on EVs. Although the company’s electrification plan is still hybrid heavy over all electric, Ford has announced the company’s aim to launch 16 fully electric models globally by 2022. 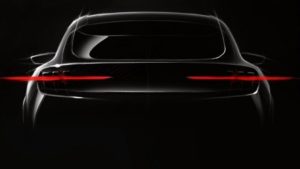