The Las Vegas Convention and Visitors Authority has approved a $48.675 million contract with the Boring Company https://www.boringcompany.com/, Elon Musk’s tunneling venture to design and construct an underground tunnel for (LVCC) near the north end of the strip. The Boring Company’s underground “people mover,” will be called the LVCC Loop and is the company's first paid commercial project.  The company, born out of the Musk’s hatred of freeway traffic, will build a 0.83 mile tunnel/transit system, transporting passengers from one end of the city’s convention center to the other.

The project will be paid for from LVCVA’s general fund, which largely consists of hotel taxes. Rides will be free.  The transit system is needed because the convention center is undergoing an expansion that will add a new exhibit hall, requiring visitors to travel a distance of one mile from one side to the other. The transit system will shorten what would be a 15-minute walk to a one-minute ride and will reach a speed of 50 mph.

"Las Vegas will continue to elevate the experience of our visitors with innovation, such as with this project, and by focusing on the current and future needs of our guests," Steve Hill, LVCVA CEO and president, said in a press release.

It is not yet clear what kind of vehicle will be used in the Las Vegas tunnel, though Model Xs, Model 3s, or modified electric vehicles with a 16-person “bus-looking” Tesla electric tram are all under consideration.  The loop is envisaged to move 4,400 passengers per hour and can be scaled up to support extra loads at the Las Vegas Convention Center for conferences like CES.

The project is scheduled to be completed in time to be used at the Consumer Electronics Show in January 2021.  The contract timeline shows that public tests will start by November 1, 2020.  Musk is betting his tunneling company can make it operational by the end of this year and he has tweeted "Looking forward to building a Boring Company tunnel in Vegas. Assuming to be operational by end of year!" he tweeted. Regardless of the completion date, two-thirds of the money in the contract won’t be paid until the project is complete. 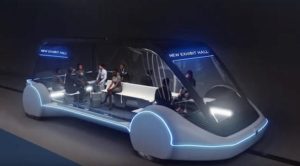 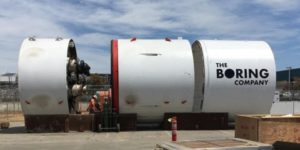 Although it’s not technically public transportation, as it will run under convention center property, the Vegas people mover will be the first publicly accessible project for the Boring Company. Las Vegas is the first paying customer to contract a deal with Musk's Boring Company, after a $1 billion bid to connect Chicago's downtown Loop to O'Hare airport hit the skids. Other proposed projects in Los Angeles and Washington D.C. are also in holding patterns awaiting environmental assessments and public input.

The Vegas project also comes with much larger aspirations. Eventually, the Boring Company proposes an expansion of the loop project.  The tunnels would stretch beyond the convention center, to potentially connect all the casinos on the Strip, downtown Las Vegas and the convention center to McCarran Airport, with proposed speeds of up to 155 miles per hour.